How I first got published, part 4 – The Waiting Game

Welcome to part 4 of a series detailing from start to finish how A Year of Hitchcock went from a neat idea to a published book (Scarecrow Press, 2009). Every step of the way, from writing to pitching to all the work we had to do after it was sold. If you’re an aspiring writer, hopefully this will help give you some insight on the process as my co-author Jim and I experienced it.

The query letter was the subject of my last blog post. If you’re not familiar with what a query letter is, go read that post. I’ve even included the text of the letter that helped us grab the eye of a few publishers.

So in our first batch of six queries sent out in late 2006, we had a publisher interested in seeing the full manuscript. Wow! Not at all what I expected. See, throughout the process I tried to keep our expectations realistic. Cautioned Jim that it might take a while to find a publisher, that the process would be a long one, that we’d get dozens of rejections before we found someone. Needless to say, interest this quickly stunned me. 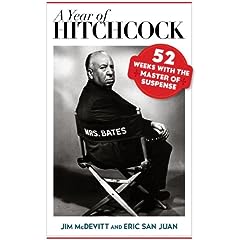 Suddenly we’re in heavy work mode WAY sooner than expected. Jim and I live in different states, so we’re not usually working face to face. Most of the book was co-authored online, but with our sudden need to polish the whole 120,000-word manuscript and to do so FAST, we decided to get together for a marathon weekend of work. We worked about 36 hours from Friday night to Sunday night reviewing, revising and editing the text for the third or fourth time. It was exhausting, but we wanted to be sure we sent out as polished a manuscript as we could muster. Then I asked someone from my office, where I work as an editor, to proofread the whole thing. FAST. Thanks, Linda!

And with that done it went out the door. We heard back. They passed. D’oh!

But you don’t stop there. You have to be prepared for many, many rejections. You have to keep pushing forward. So the same day we heard back that the publisher had passed, we sent out another five letters. A few weeks later, another hit! Another publisher wanted to see the manuscript! Hooray! This publisher was Scarecrow Press.

It’s now May 2007, a few months after we’ve finished the book. We once again ship out the full manuscript. It arrives at his office a few days later. And so we wait.

And wait some more.

October. Finally, in the last few days of the month, we hear back from the editor in question, Stephen Ryan at Scarecrow Press. Mr. Ryan found the manuscript “intriguing,” but said we’d have to agree to “a few changes” before he could offer us a contract. Well that was a good sign. He was already implying a deal is possible.

Did we jump right at the offer? We did not. Though thrilled to be on the cusp of publication, we wanted to know what these changes were going to be. We wanted to be published, yes, but we didn’t want to compromise our vision for this book. So we asked him to outline the changes he’d like to see made and we would consider them.

November went by and we did not get the proposed changes.

This is NOT a complaint or knock on Mr. Ryan, who ended up being fantastic to work with and whose suggestions made A Year of Hitchcock ten times the book it was when we first submitted it. That’s the absolute truth. Courteous and helpful to the last, we look forward to working with him again. I point out these delays so other writers know that this is just the way the industry works. Delays are the norm. I have a friend who works as an editor at Bancroft Press (or did at the time of the original blog post) and according to him, our wait was about average. This stuff can stretch out over very, very long periods of time. He says he feels guilty to leave some authors waiting for upwards of a year, but the backlog of work is TREMENDOUS.

Oh, and DON’T STOP WRITING! As you’re playing the waiting game, ensure you’re at work on another project. For instance, while all this was happening I was finishing up a book on the history of Lakehurst, NJ and the surrounding area, best known for being the site of the Hindenburg Disaster. (The book remains unpublished. If you publish local history and have an interest, contact me!)(2017 edit: the book is now available.) While your project is on hiatus, start a new project. KEEP WRITING!

Finally, in April 2008, we heard back from Mr. Ryan. Yes, he’s still interested in working with us. We’ll just have to includes changes that amount to … well, pretty much re-writing the entire book! Yikes!

More on that next time.